What are Environment Variables Print

This only works if it replaces the entire property - it cannot be used to substitute just part of the value. For example, it is not possible to use CLIENT-${HOST}.

As nodes provide their own edit dialog, not all properties will provide a text input that can be used to enter the env-var string. In that case, you may consider hand-editing the flow file to set the property. 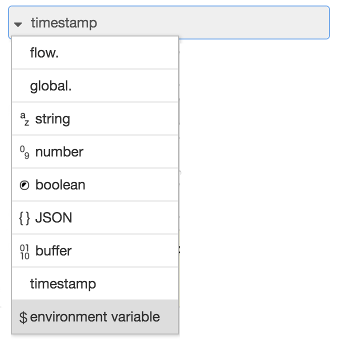 Within the editor, the TypedInput widget can offer ‘environment variable’ as a type. When this type is selected, its value will be evaluated as follows:

Environment variables can be accessed in JSONata expressions, such as in the Change node, using the $env function:

Within a Function node, environment variables get be accessed using the env.get function:

Did you find it helpful? Yes No

Send feedback
Sorry we couldn't be helpful. Help us improve this article with your feedback.